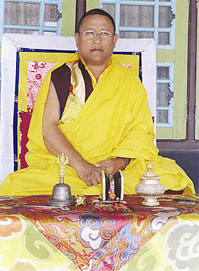 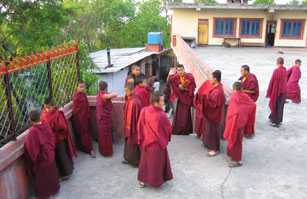 Monks at the monastery

The 70 monks who live in the monastery are from seven to 25 years old and come from different families and races. A lot of kids are from poor families with non-educated parents. The monastery provides them cloths, food, accommodation, medical care and education. They are educated in Tibetan, Nepali, English, Philosophy and also learn practical things like Turma or simply help in the kitchen or in the garden. On Saturday the monks have holiday and most of the time they go to play football together. The monks live unsolicited in the monastery and can leave at any time. So far the monastery has broad up more than 300 kids who have already taken their own ways. Some of them went to India to study the Dharma, some of them went back to their villages to care about their parents and some others have become Lamas who travel around the world spreading the Dharma.